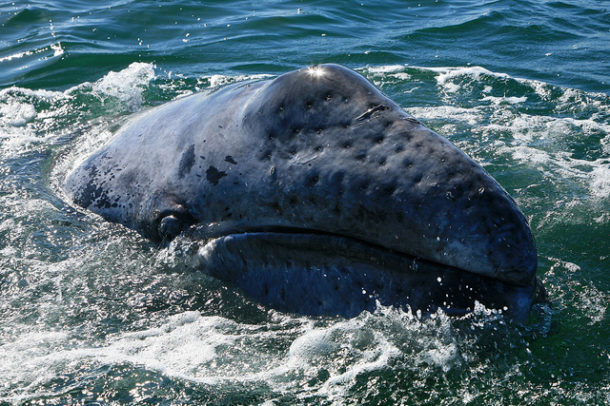 PHYSICAL TRAITS Dark slate-gray in color and covered by characteristic gray-white patterns, scars left by parasites, short baleen, 6 to 12 dorsal crenulations (“knuckles”), no dorsal fin, usually body has patches of barnacles and whale mites – the latter of which are passed to the newborns at birth. Females are slightly larger than males

BEHAVIOR Gray whales eat by turning on its side pulling crustaceans and mollusks out of the mud and sand on the shallow sea bottom. The usually feed on the right side which can result in right-eye blindness. They give birth in shallow lagoon waters, migrate north-south annually, with a gestation period of 12-13 months

HABITAT Coastal waters within the continental shelf. Since industrialized whaling these only inhabit the Pacific

LOCATIONS The Eastern Pacific (North American) population is reasonably recovered. They winter along the coast of California and breed and give birth in the Lagoons of Baja Calofornia, migrating to the Bering Sea in the spring The Western North Pacific (Asian) population is critically endangered, feeding in the Sakhalin Islands area and found in the Sea of Okhotsk.

Gray whales are coastal animals, always swimming above the continental shelf. The gray whales of the Atlantic were slaughtered by Portuguese whalers who because of their proximity to the shores hunted them as early as 500 AD.

They migrate along the coasts, breeding in lagoons and estuaries in the southern extents of their migrations. Old whalers called them “mud whales” because they forage for invertebrates buried in the mud. (They filter out the food from the mud with their short, bristly baleen that is reminiscent of a deck brush.)

They were also called “Devil Fish” because unlike all other whales (except the Sperm whale) they aggressively attacked the whalers, maiming or killing one out of four who worked the fishery.

The remaining gray whales are in the Pacific. The Western Pacific Grays are seriously endangered (130 animals left with only 20 breeding females) and recently set upon by oil and gas operations in Sakhalin, Russia where they feed in the summer. The Eastern Pacific grays are currently in a pretty healthy population state (20,000+). Having not been hunted since 1936 when their populations sank below commercial viability. This population now only has to contend with habitat displacement and ship strikes.

In the summer of 2011 a grey whale was sited in the Mediterranean and later off of Spain. The speculation was that it was an intrepid scout (or confused individual) from the Western Pacific population seeking alternative habitat.

Their vocal repertoire consists of knocks, croaks, bangs, and grunts. Not sounds that humans find compelling, but probably pretty important to the Grays.